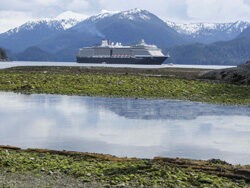 North America’s Alexander Archipelago is a collection of islands stretching 300 miles off Alaska’s southeast coast. About 1,100 islands make up the archipelago, with coastal mountains that rise steeply from the Pacific Ocean. Inaccessible to the mainland, the islands are separated by narrow bays and fjords that protect the Inside Passage from winds and storms that come from the Pacific Ocean. Sitka on Baranof and Ketchikan on Revillagigedo serve as the principal urban centers.

Tongass National Forest covers the majority of the islands. You can reached Islands only by boat or airplane. The largest islands include Chichagof, Admiralty, Baranof, Kupreanof, Kuiu, Mitkof, Wrangell, Prince of Wales, and Revillagigedo.

Chatham Strait, a narrow strait through the northern Alexander Archipelago in southeastern Alaska. It stretches approximately 150 miles, past Chichagof Island and Baranof Island on the west and Admiralty Island and Kuiu island on the east, to Coronation Island and the open sea.