7-day Alaska cruise to Inside Passage, Sitka, Juneau, Haines & Ketchikan on board Enchantment of the Seas 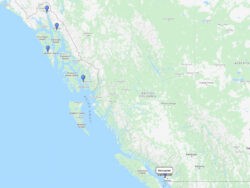 Experience wildlife, wilderness, and native culture on this Alaska cruise with Royal Caribbean

Haines is a major stop for the Alaska Marine Highway System, whose ferries drop off RVers and other travelers en route to the Alaska Highway to the north. The town of Haines sits on the northern coast of Lynn Canal, the longest and deepest fjord[…]

Enjoy a seven-night Alaska Glacier Experience Cruise from Vancouver through the beautiful Inside Passage, exploring fjords, glacial valleys, and untouched wilderness with Royal Caribbean. Discover Inside Passage, Sitka, Juneau, Haines and Ketchikan with Royal Caribbean’ cruise ship Enchantment of the Seas. Enchantment of the Seas leaving Vancouver for 7 nights from June 11, 2023.