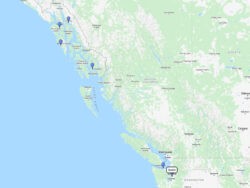 Tracy Arm-Fords Terror Wilderness consists of two deep and narrow fjords: Tracy Arm and Endicott Arm. One quarter of both fjords’ areas are covered in ice, and they’re both longer than 30 miles. There is a lot of ice floating around in the fjords during[…]